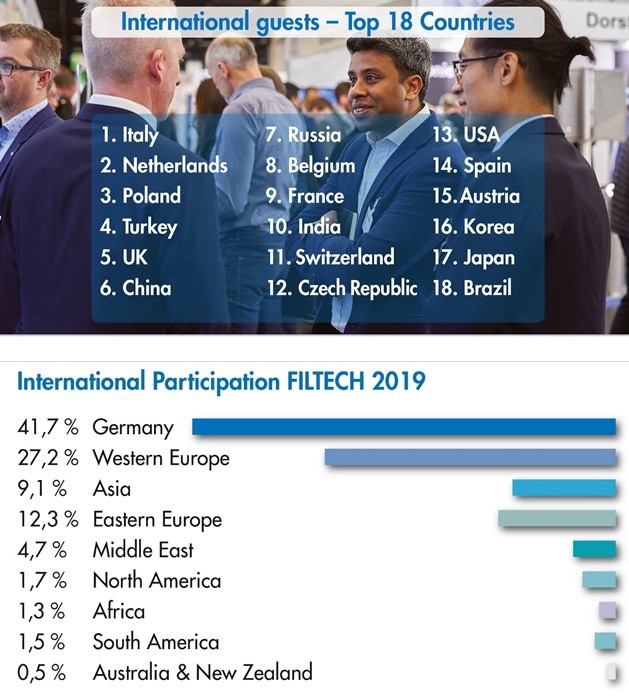 Trade fair and conference for filtration and separation with additional exhibitors, visitors and stand spaces

More visitors, more exhibitors, more presentations: The FILTECH 2019 has again shown the importance of filtration and separation across all industries. As a meeting point for experts, the combination of a trade fair and conference has established itself with an international audience.

When the FILTECH 2019 ended on 24 October after three days, the organiser recorded 16520 visitors during the 3-day trade fair period – a new record for the most important international meeting point for filtration and separation. Already before the event started, it was certain that the Filtech continued to be on course for growth. “With more than 420 exhibitors, more companies than ever before registered for the trade fair area in 2019”, says Suzanne Abetz, from Filtech Exhibitions Germany. An unmistakable sign of this was the enlarged exhibition space: For the first time, the Filtech occupied both levels of Hall 11 of the Cologne Exhibition Grounds this year.

Conference with a strong programme

An important reason for the importance of the Filtech as the most important platform worldwide for filtration and separation solutions is the strong conference programme. With more than 180 presentations, visitors in 2019 had even more choice than in the previous years. A scientific organisation committee now always makes sure that relevant topics are communicated in a neutral and informative manner.

The trend topic of Industry 4.0 has unmistakably also arrived infiltration. For example, Prof. Dr Hermann Nirschl from KIT talked about the digitisation of centrifuges, who emphasised the potential of optimising the processes as an argument for digitisation in separation technology – this can save material, energy and time. However, away from digital processes, the presentation by Friedrich Edelmeier from Haver & Boeker on newly woven filtration media, which offer doubled flow capacity, better tolerance against heat and corrosion and optimised performance with laminates.

The Filtech is distinguished by a wide range of industries with a clear thematic focus: Trade visitors found solutions for all relevant subject areas and techniques for the separation of gases, solids and liquids at the event. The increasing importance and perceptibility of filtration were also noticeably for the general public in 2019 – such as at the Mann+Hummel stand. The filter manufacturer exhibited its Filter Cubes III, of which 23 specimens are cleaning the air of fine dust particles and nitrogen dioxide at Neckartor in Stuttgart. “A large number of the general public visited our stand from the first day onwards – particularly in the breaks between the presentations at the conference”, says Frank Spehl, Director R&D at Mann+Hummel, who particularly appreciates the combination of a trade fair and conference at the Filtech. “The conference as part of the FILTECH is an important platform for us to present our innovations”, says Spehl, whose company was represented with five presentations.

“The personal connection makes a big difference”, confirms Andy Slater, Segment Manager Business Development at Lenzing. The company exhibited the Lyocell short cut fibres, which are made of wood, compostable and biodegradable for use in wet-laid filtration media  “In our industry, it’s important to physically see, experience and understand a product. The Filtech is best positioned here”, says Slater. “Visitors arrive with very clear expectations. As exhibitors, we know these expectations exactly and can satisfy them accordingly.”

As in the previous years, the share of international participants was high, at 58.3 per cent of visitors and 64 per cent of exhibitors. The suppliers from abroad particularly appreciate the event as an important meeting point. “The past has shown that growth is virtually guaranteed for the Filtech – not only due to European exhibitors but also those from all over the world. The interest in the event is particularly prominent in Asia”, says Dr Graham Rideal, Founder & Senior Scientist with the exhibitor, Whitehouse Scientific. The laboratory, based in Great Britain, is one of the most important suppliers of particle size analyses.

“Our company has already been in the trade fair several times. It is very important for us”, confirms Kai Karinen, CFO at ACA Systems, whose company specialises in the online measurement of porosity and permeability. “We are here to acquaint ourselves and meet customers”, says Karinen. “Most of the visitors here from various countries are entirely concentrated on filtration media.”

Dr Gunnar-Marcel Klein, Vice President Engineering Filter Elements, MANN+HUMMEL states “After great success with our first presence as an exhibitor in 2018 we have doubled our booth size in 2019, resulting in more than 100 % growth of registered customer contacts. The FILTECH has developed now as a main event in our trade fair calendar. We are reaching out to important customers, especially in the Life Sciences & Environment filtration, but also in the Automotive filter business. For more than 20 years we have been participating in the conference with a large delegation. FILTECH is where we meet our most important suppliers and scientific partners in one place and get inspired by new ideas and the latest developments infiltration”.

“FILTECH is a must for all engaged in the field of filtration” states Dr Thomas Netsch, Group Vice President Filtration for Industry & Environment, Hengst SE “For our Filtration for Industry & Environment division, the show was a great success in every respect. We were able to establish top-class contacts with customers, suppliers and the trade media and held interesting discussions. As a manufacturer of filter solutions for a broad range of applications and industries – ranging from vacuum cleaners, HVAC & Life Science all the way to air intake filtration for power gen and solutions for air pollution control – Filtech provides the right stage to present our expertise and wide range of products. The combination of the trade fair with the FILTECH Symposium makes this event even more beneficial.”

On exhibitor, who stands for the growth of the Filtech, is Environ Care Products. The Indian supplier of activated charcoal filters is active in niche markets and therefore particularly appreciates the specific character of the Filtech. “This is the first time that we have been here, but for us, the Filtech is the right event, because the attention to our products is very high here”, says Praful Surana, Executive Director at Environ Care Products. Filt Air from Israel, which offers a plug-in module for the disinfection of ambient air with Serionizer, also took part for the first time in 2019.

However, in addition to specialist suppliers of filtration media, the Filtech has also become a popular meeting point for companies from systems engineering – such as BHS Sonthofen. In addition to the established offering in the area of cake-forming filtration processes, the systems engineer presented a new pocket measuring instrument, which provides fundamental data about the filtration capability of a suspension and about the general configuration data of the production filter. “The customer feedback was entirely positive. We are already looking forward to the Filtech 2021”, says Matthias Rahmann, Technical Sales Manager Filtration Technology at BHS Sonthofen.

The 18-month cycle has proven itself with exhibitors and visitors. “We already have registrations now from many exhibitors, who definitely want to be there again the next time”, says Suzanne Abetz from FILTECH Exhibitions Germany.

New Dates to be announced soon! 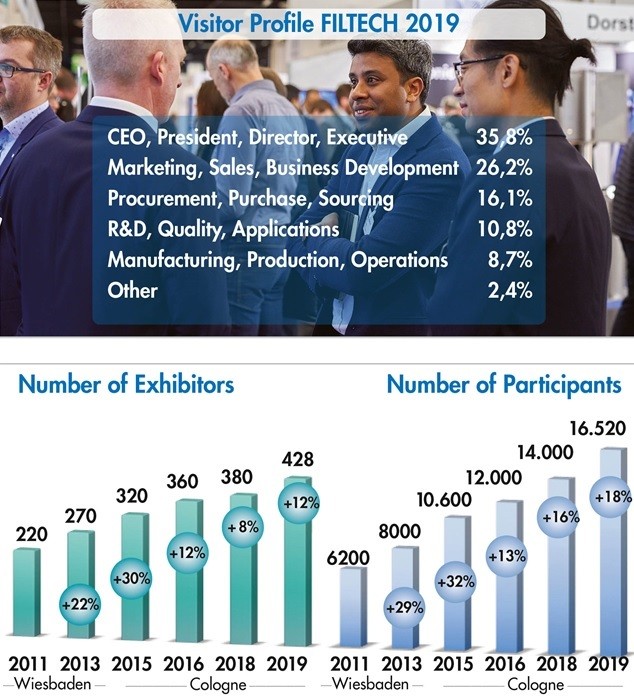