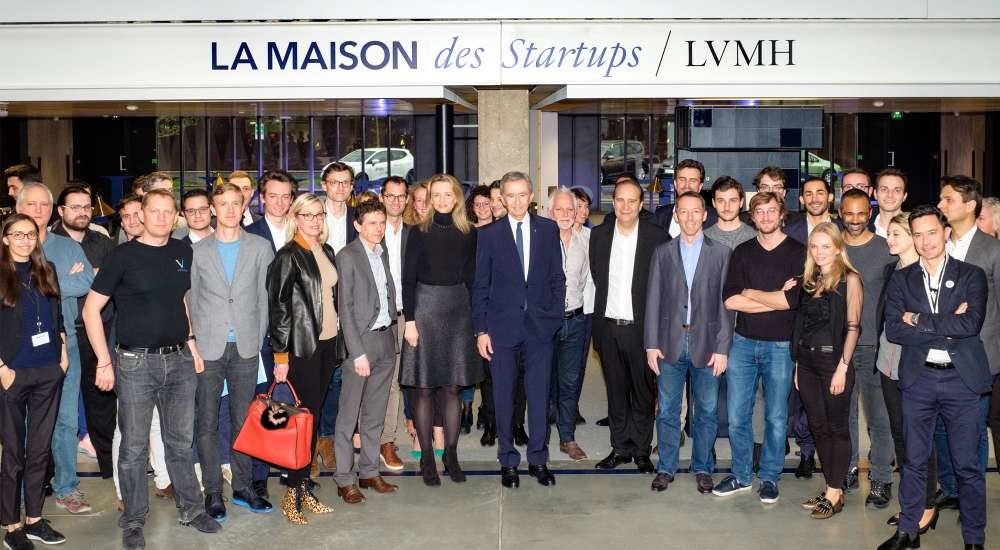 LVMH is pleased to announce the creation of an accelerator program at the STATION F startup campus in Paris. The LVMH program will welcome 50 international startups each year. This initiative will drive business acceleration between LVMH’s Maisons and startups to invent innovative new products and services for the luxury market. 89 work stations are available for startups within the 220-square meter LVMH space. By creating La Maison des Startups in the heart of the world’s biggest startup campus, LVMH reaffirms its values of innovation, entrepreneurial spirit and excellence, the pillars that anchor the Group’s growth.

With 89 work stations, the LVMH program at STATION F will welcome 50 international startups each year in two six-month terms. The first group joined the campus in November 2017.

Over half the startups that joined the program are identified through the LVMH Innovation Award, at the Viva Technology show, during which the Group welcomed more than 80 startups in 2016 and 2017, particularly in the context of the LVMH Innovation Award. Nearly all of them already work with some of LVMH Maisons (Moët Hennessy, Dior, Louis Vuitton, Sephora etc.). In addition, several LVMH employees whose projects won awards during different editions of the DARE LVMH initiative dedicated to intrapreneurship within the Group will also be welcomed at STATION F to launch their projects.

In addition to a unique workspace and environment that inspire innovation, the LVMH program at STATION F lets entrepreneurs benefit from personalized coaching and support from LVMH group experts. A series of workshops will allow the startups to familiarize themselves with challenges facing the luxury industry, and pitch sessions will be regularly organized to let them present the evolution of their solutions to representatives of LVMH Maisons. Networking sessions will be on the agenda too.

By providing a unique environment where entrepreneurs can access resources, invent and create synergies with the many well-established initiatives across the Group, LVMH is further strengthening its already robust digital ecosystem.

“Innovation is an integral part of the history of our Maisons, which are often centuries old. This is why we know, perhaps better than others, how to find ways of working with startups that benefit us all.” Bernard Arnault, Chairman and CEO, LVMH

“LVMH has long held innovation as a core value. Innovation isn’t just a buzzword at LVMH, it’s a practical obsession, crucial to maintaining our leadership position long-term. Collaborating with startups helps us stay abreast of both business opportunities and ways of working. A healthy startup ecosystem is necessary for a healthy industry.” Ian Rogers, Chief Digital Officer at LVMH

“Just like STATION F, LVMH is a talent incubator. We are delighted that the collaboration between the entrepreneurs of La Maison des Startups program and the talent of our Maisons contributes positively to the development of everyone’s skills. Innovation arises from exchanges and constructive confrontations.” Chantal Gaemperle, EVP Human Resources & Synergies, and member of LVMH Executive Committee

“We are delighted to have LVMH join STATION F as a partner and we are convinced that their expertise in the luxury industry is the most relevant for startups who want to revolutionize it.” Xavier Niel, founder of STATION F

“It’s a great challenge that awaits those who want to renew the luxury industry all the while maintaining it to the same level of excellence that it is known for, especially in France – who better than LVMH to support luxury startups at STATION F? We are proud to have them as partners.” Roxanne Varza, Director of STATION F