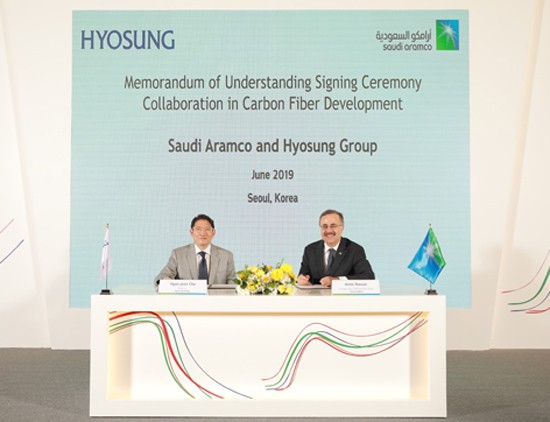 – Chairman Cho signed an MoU for the establishment of carbon fiber plants with Aramco CEO Amin H. Nasser on June 25, 2019.- The two sides also agreed to strengthen cooperation in the electricity field including ESS and transmission and distribution grids
– Chairman Cho said, “Aramco’s business know-how and Hyosung’s technology will open up opportunities for the growth of new businesses such as carbon fiber”

Hyosung Group is strengthening its partnership with Saudi Aramco (Arabian American Oil Company), the world’s largest comprehensive petrochemical company, for cooperation in the carbon fiber, including the construction of new plants.
Hyosung Chairman Hyun-Joon Cho signed an MoU with Amin H. Nasser, the CEO of Saudi Aramco, a global petrochemical company, at the Conrad Hotel in Yeouido, Seoul, on June 25 with plans to build carbon fiber plants.
Under this MoU, Hyosung and Aramco agreed to cooperate in the development and application of carbon fiber production technology and actively review ways to build and expand carbon fiber plants in Saudi Arabia and Korea in the future. They also agreed to strengthen mutual cooperation in chemical fields, such as polyketone and PPDH, which are new advanced materials developed by Hyosung, and electric power such as ESS and transmission and distribution grids.
Hyosung Chairman Hyun-Joon Cho also attended an official luncheon for Saudi Arabian Crown Prince Mohammad bin Salman at Cheong Wa Dae on June 26 and discussed specific cooperation measures with Saudi participants.
Carbon fiber weighs only one-fourth the weight of steel but is 10 times stronger. In 2011, Hyosung became the first Korean company to develop carbon fiber materials with its own technology. Since 2013, the company has been running a carbon fiber plant in Jeonju, North Jeolla Province, which can produce up to 2,000 tons of carbon fiber a year, and began construction for additional carbon fiber facilities with the aim of an annual output of 2,000 tons at the Jeonju Plant in February.
Carbon fiber is a key material for the safe storage, transportation, and utilization of hydrogen energy. Therefore, it is regarded as a core material for hydrogen tanks that have to be lightweight but withstand the pressure that is hundreds of times higher than air.
In March, Hyosung Chairman Hyun-Joon Cho also signed a comprehensive MoU with Aramco on cooperation in the chemicals, advanced materials, and hydrogen-related businesses. Aramco is said to have considered it necessary to cooperate with Hyosung, which has secured its proprietary technologies in advanced materials such as carbon fiber, while reviewing new businesses in automobiles and renewable energy.
At that time, Aramco’s executives, including Senior Vice President Ahmad A. Al-Sa’adi, visited the carbon fiber plant in Jeonju and expressed confidence in Hyosung’s distinctive technology while touring the carbon fiber production line.
Chairman Cho said, “I hope that Aramco’s expertise in management and Hyosung’s exclusive technologies will create synergy in the growth of future businesses including carbon fiber.”