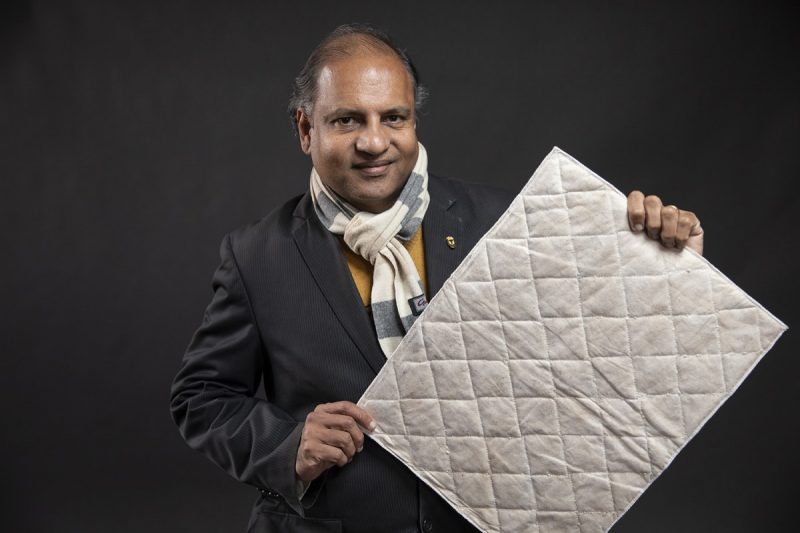 TowelieTM is a cotton-based mat to absorb oil spills.

Nine years ago, Texas Tech University material scientist Seshadri Ramkumar had an idea to help clean up the environment.

With his expertise in technical textiles, he set out to determine the best way to sop up spilled oil – and he did. In 2017, Ramkumar announced his findings: raw cotton works better than any other product.

But then what? What effect does this research have on the real world? Ramkumar’s findings had a huge potential impact – but unless someone actually creates that raw cotton product and uses it to absorb oil, does the research really achieve its goal?

“A lot of ideas come out of labs,” said Ramkumar, a professor of chemical countermeasures and advanced materials in the Department of Environmental Toxicology. “It’s nice to know your idea will work, but unless there is somebody who is going to grab that idea and run with it, create a product and put it out into the world for others to use, it’s still just an idea.”

Ramkumar’s work, however, is much more than an idea. Thanks to the team he’s put together, his idea has become a tangible product now being marketed – and used successfully – to clean up the world.

After determining that raw cotton was the best sorbent, Ramkumar knew it needed to be made into a form that was commercially usable – and for that, he needed a collaborator who could create the physical product.

Ramkumar holds the thin mat that grew out of his idea.

He partnered with WellGro United in Chennai, India, which had a machine at its collaborator’s factory that could form raw cotton into a flat, planar structure.

The product’s final form is a mat, wipe or roll. There currently are two versions – one that is 100% cotton, and one with a cotton core inside a very thin packaging material, which is 85%-90% cotton.

“I needed to use their wisdom in getting this structure and then work in multiple iterations, because it took a couple of years to come up with the optimum thickness and structure and, more importantly, cost,” Ramkumar said.

In order for the product to be marketable, it had to be priced competitively with other products used for the same purpose. That was the tricky part, because most competitors used a plastic base, which was much cheaper – but ultimately sticking with a cotton core worked to their advantage.

Eight years ago, while Ramkumar was proving the science, he had two high school students helping in his Chemical Countermeasures and Advanced Materials Laboratory. One was Coronado High School senior Ronald Kendall Jr., the son of one of Ramkumar’s professional colleagues who wanted to participate as part of a science project. The other was Luke Kitten, then a student at Trinity Christian High School.

While working on the research, Kendall graduated from high school and began attending Texas Tech. He stopped working in Ramkumar’s lab after his freshman year, but the two kept in touch. In 2016, Kendall graduated with his bachelor’s degree in energy commerce.

When WellGro United told Ramkumar they needed an international partner to help market the product, particularly someone in Texas because of the state’s role as an oil and natural gas hub, Ramkumar asked Kendall to come on board.

“Traditionally, a product like this would be considered an oil-absorption mat, and it would be used for passive applications, like absorbing dripping oil from a machine,” Kendall said. “A lot of the mats and competitors that look similar to the TowelieTM are not durable, and they’re very flimsy. You just lay them there, and then they fall apart. The TowelieTM is designed, stitched and it’s very durable, so we’re able to use it for active applications as well.

“In the automotive sector, a lot of companies are not using as many of the little red rags and blue shop towels that you may see in your local oil-change shop. They’re able to do day-to-day activities more efficiently by utilizing our TowelieTM product because it has a porous outer layer that allows them to cut through sticky grease or oily messes when they’re doing a job. It’s better on the environment, and in a lot of cases, it’s making their job easier, whether that’s an oil-change shop or some of our customers in oil and gas.”

Water beads up on the surface of TowelieTM. Designed for marine environments, TowelieTM can absorb oil while repelling water.

One customer, a large oil-and-gas company, was using shop towels to clean paraffin off drilling pipes before they found TowelieTM.

“Instead of going through hundreds of rolls of shop towels a day, they only use a couple ToweliesTM a day,” Kendall said. “Having the absorption factor with a wiping factor makes this a time-saving product for a lot of people and companies.”