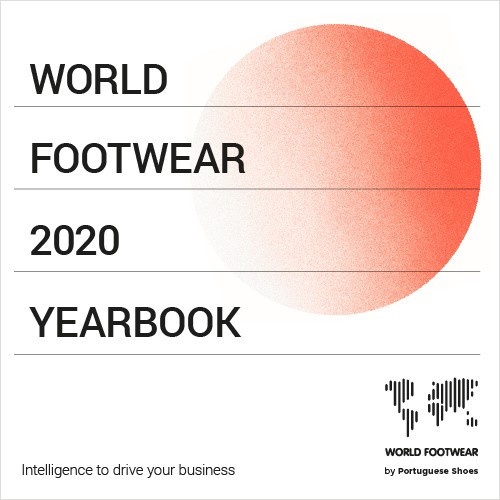 2019 saw a worldwide slowdown in the footwear industry. That slowdown will certainly continue throughout 2020, given the reality of COVID-19. In 2019 footwear production and exports grew by 0.6% and 0.1%, respectively. Data are taken from the World Footwear 2020 Yearbook just released by APICCAPS, the Portuguese Footwear Association. Over the course of the last 10 years, during which the World Footwear Yearbook has been published, worldwide footwear production has increased by 21.2% and global exports have grown by 10.6% in volume and by 59.1% in value.

15 billion pairs, representing 62% of all footwear produced, were exported in 2019. Unsurprisingly, Asia is the origin of most exports with its world share of 83.9%. Asia’s export share has decreased slightly over the last decade, as is also the case with every continent but Europe. Over the last ten years, Europe has increased its share in global exports by 2.6 percentage points.

The value of footwear exports continued to increase in 2019 with a new record of 146 billion dollars, 2% more than in the previous year. This growth was driven mostly by Asian countries which increased their exports by 2.8%. In Europe, the growth rate was only 1.2%. In other parts of the world, this rate was lower or even negative.

FOOTWEAR PRODUCTION INCREASED BY 21.2% OVER THE LAST DECADE. NEW RECORD SET IN 2019

Worldwide footwear production has increased by 21.2% since 2010 at an average yearly growth rate of 2.2%. In 2019 the industry slowed down, growing by only 0.6%. However, this was enough to establish a new production record of 24.3 billion pairs, a record which might hold for a few years yet, given the impact of the COVID-19 pandemic. The footwear industry continues to be strongly concentrated in Asia where almost 9 out of every 10 pairs of shoes are manufactured. Over the last decade, Asia has slightly strengthened its dominance in the international scene, increasing its share of world production by some 2 percentage points.

ASIA ACCOUNTS FOR MORE THAN HALF OF GLOBAL CONSUMPTION

Asia’s consumption accounts for more than half of the grand total. Europe and North America each represent 15%. At the country level, China, India, and the US head up the largest consumer markets.

The European Union, if taken as one region, would represent the second-largest consumer market for footwear with 2 680 million pairs consumed in 2019. Nonetheless, there are still important geographic differences in consumption patterns. Per capita, footwear consumption varies from between 1.6 pairs in Africa to 5.6 pairs in North America.

China was the source of almost 2 out of every 3 pairs of shoes exported in 2019 but its market share has been steadily declining over the last decade. Since 2010 China has lost 7 percentage points. Moving in the opposite direction, Vietnam has almost doubled its market share over the same period. India and Turkey have also shown remarkable performances throughout the decade.

APICCAPS, the Portuguese Footwear Association, has just launched the 10th edition of the World Footwear Yearbook, a project developed since 2011, which analyses the most important trends within the worldwide footwear industry. Data for 2019, both in quantity and value, is available, making it possible to position the main players with regards to production, consumption, exports and imports. The publication also includes a specific analysis of 84 different markets as well as addressing the evolution of the sector’s leading global players.

The World Footwear Yearbook 2020 (WFY 2020) is now on sale from  www.worldfootwear.com