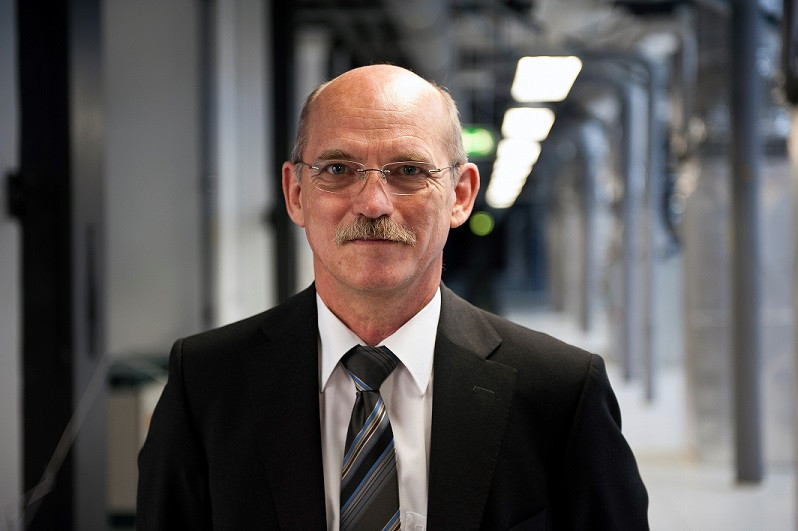 His colleagues know and appreciate him as a celebrated expert for electronics system integration and specialist for durable chip connections: Professor Klaus-Dieter Lang is retiring from his post as the long-standing and successful Director of the Fraunhofer Institute for Reliability and Micro integration IZM. Time for a look back at his achievements and his contributions to the world of microelectronics.

“People say: You should leave while it’s still fun.“ Klaus-Dieter Lang cannot see how this applies to him: “Applied research is always fun, and nowhere more so than in innovative microelectronics and microsystems technology.” After completing a much-celebrated thesis, he set up not one, but several organizations dedicated to his field of work, was appointed to the Chair of Nano-Interconnect Technologies at the Technical University of Berlin, became an active contributor at countless committees and research bodies, and doubled the commercial revenue of Fraunhofer IZM almost in passing. His story seemed geared for success from the very beginning.

Fresh from graduating in electrical engineering in the 1980s, Klaus-Dieter Lang turned his attention to semiconductors, assembly and interconnect technologies, packaging, and quality assurance in his work at the Electronics department of Humboldt University. His work for his doctorate and post-doc research for his lecturership led to him winning the Humboldt Prize. After establishing the micro joining and optical interconnection technology section at SLV Hannover, he was one of the founding members of Fraunhofer IZM in 1993 and continued to shape the story of the Institute whose Director he became in 2010.

One constant thread in his strategy for Fraunhofer IZM was the steady build-up of competencies and resources across the value chain of microelectronics systems, based on cutting-edge packaging technologies to pave the way for sophisticated applications. His focus was on optimized integration concepts, greater reliability, integrated sensors and actuators, and the miniaturization and adaptation of components to any product design or installation space. His efforts led to the formation of five business areas, chosen specifically to match the needs of industrial clients.

An enterprising academic and academic entrepreneur

Klaus-Dieter Lang’s work was an almost archetypal expression of the Fraunhofer principle of combining scientific creativity perfectly with efficient innovation management and dependable performance. He is the prolific author and co-author of four monographs and no fewer than 430 contributions to publications on interconnect technology, packaging, microsystems engineering, and system integration, and he holds more than a dozen patents. Under his careful stewardship, Fraunhofer IZM was recognized by the German Science Council for its scientific excellence as one of the countries top research organizations in the field of electrical engineering. In his years at the helm, the operating budget of the Institute increased by more than 60 percent (from €23.1 million in 2010 to €37.6 million in 2020), and revenues from industry cooperations almost doubled (rising from €7.5 million in 2010 to €14.4 million in 2020). This story of continued success is also reflected in the growth of the Institute’s human resources, with more than 130 new colleagues joining in the same period.

Eyes on the future

Klaus-Dieter Lang’s commitment means that Fraunhofer IZM is one of the world’s leading research institute’s determining the key aspects of modern microelectronics:

In 2017, Fraunhofer IZM became part of the Research Fab Microelectronics Germany, Europe’s largest R&D collaboration in micro and nanoelectronics funded by the Ministry of Education and Research.

And there is more: On top of its sites in Berlin and Dresden, Fraunhofer IZM has come to Cottbus to pursue new high-frequency sensor technologies with leading local partners and focus on the design, testing, and characterization of integrated antennas, the co-design of chip-package antennas, and system integration solutions for miniature HF sensor systems.

Hardware start-ups have also featured prominently at Fraunhofer IZM under Klaus-Dieter Lang. For the last four years, the Institute has given young and aspiring SMEs an opportunity, in the form of the “Start-A-Factory” prototyping space funded by the Senate of Berlin, to turn unique ideas into first professional prototypes, using a unique equipment and workspace infrastructure with cutting-edge technical facilities and access to a whole network of Fraunhofer IZM researchers and other partners.

On 30 September, Professor Lang will hand over a successful and globally respected microelectronics research institute to his successor. His are indeed big shoes to fill, but his own history makes him certain that the transition will run smoothly: In 2010, he had himself taken over from a packaging pioneer of global renown, Professor Herbert Reichl. And Klaus-Dieter Lang also knows his Institute in good hands, as he is passing control over to interim director Professor Martin Schneider-Ramelow with the best wishes for the future of his Institute.

A quiet retirement?
What does retirement have in store for Klaus-Dieter Lang? He will continue to contribute his voice in his field, as he will remain an active member of a host of working groups, committees, and events.
In his more private hours, he will indulge in his passion for travel and various sports, and he is already looking forward to spending more time with his grandchildren – an echo of his passion for working with and mentoring junior researchers in his time as an active educator and scientist.
One passion he plans to pursue more in the future will come as a surprise for some: Klaus-Dieter Lang is an avid student of antiquity, and one can expect to soon find him wandering around the great ruins and sites from that period of history.

Fraunhofer IZM thanks Klaus-Dieter Lang for more than 28 years of untiring support and a decade of careful and forward-looking guidance and wishes him all the best for a healthy, inspired, and inspiring retirement.