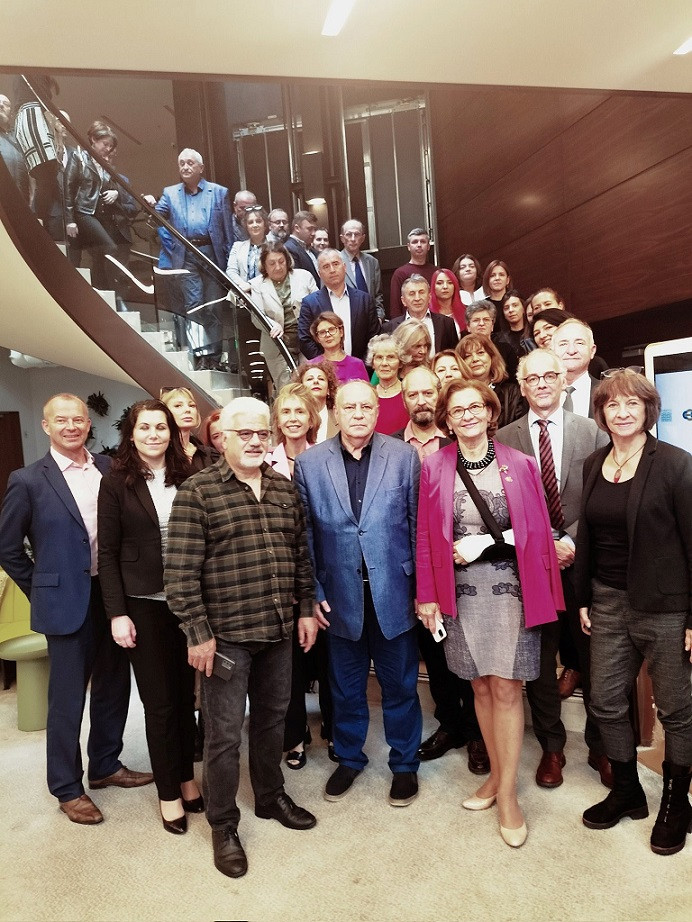 As part of an ongoing EU social dialogue project, social partners met on 25-26 October 2022 in Bucharest to discuss how to meet the future challenges set out in the EU Sustainable Textiles Strategy.  They concluded that change is coming and that urgent action is needed to keep the industries competitive in Romania and their workers in work.

This week, national and European social partners, policymakers, researchers, academia, and other experts met in Bucharest to discuss the twin green and digital transition of the textile, clothing, leather, and footwear (TCLF) sectors in Romania. With the EU focused on several proposals within the EU Sustainable Textiles Strategy, the Green Deal, plus the newly adopted EU Directive on Minimum Wages, big changes are foreseen for the TCLF industries and their workers.   The consensus is that now is the time to get prepared to make sure that the transitions benefit both the companies and their workers in what is an important EU country for the European textiles ecosystem.

The TCLF sectors are significant for Romania’s economy, with over 145,000 workers representing 14% of employees in the manufacturing sector. Romania remains a major exporter. Most of its production goes to the EU, signifying the importance of future EU legislation focused on ensuring only sustainable TCLF products on the EU market from 2030. However, with the Romanian ecosystem still COVID-shocked, and suffering from almost 50,000 job losses since 2019, plus the current energy and raw material crises, the pressure on the sectors to transform is momentous.

In this difficult economic scenario and the impact of the energy crisis on people’s pay and living standards, safeguarding industries and jobs is vital. While the move to more high-tech and high-quality production could lead to higher wages, the social partners stressed the importance of remaining realistic, with support and investment needed at national and European levels. European social partners were able to raise these concerns directly to the national and European policymakers at the meeting, demanding that social partners must be involved in planning for the sectors’ future.

Trade union representatives from Confpeltex and Uniconf highlighted the huge future challenges, not only regarding the twin green and digital transitions but also in attracting young people to the sector, maintaining that wages remain too low, especially during the current cost-of-living crisis. They stressed that they were ready to engage with employers to work towards a positive future, while directly calling on the representatives from the Ministries of economy, entrepreneurship, and labor to act and show support for workers.

Employers and the national employers’ representatives, Fepaius and Sfera Factor shared their concerns, noting the difficulties in receiving public support and the shortage of skilled workers to ensure that the sectors remain operational

Various guest speakers attended, including MEP Maria Grapini, a former Romanian Minister and an advocate for the Romanian TCLF sectors, who called for an ambitious national plan backed up by EU support. Other experts, including from the Friedrich Ebert Foundation and the Technical University of Lasi, seconded the move in Romania to high-quality production by highly skilled workers, with investment in both infrastructure and the workforce being urgently needed.

Both employers and trade unions noted the diminution in social dialogue following national legislation introduced in 2011.  Strong social partners and quality social dialogue are especially important in preparing for the future and in joint lobbying of national policymakers on common interests.

The social partners agreed to immediately follow up on this positive engagement via a joint letter from national and European social partners to the Romanian government calling for engagement and support to ensure a successful transition of the TCLF sectors in Romania, while also remaining competitive.

“The triple energy, raw material, and cost-of-living crises are putting massive pressure on the TCLF sectors and workers in Romania. The new EU Directive on Adequate Minimum Wages is a huge trade union success, but we can’t wait two years for its implementation. Workers need a pay rise now, and governments must step in to make sure that this happens.

We will not let European industries and industrial workers be the victims here. Trade unions call for urgent action to safeguard the sectors and their workers, and we call for quality social dialogue both at national and European levels to get ready for future challenges. Real engagement between workers and employers is needed to ensure that the TCLF sectors in Romania successfully transform into sustainable and competitive industries with good pay and conditions for workers.’’

“The upcoming EU Textiles Strategy will put serious pressure on the industry to become more sustainable while competing in a very globalized environment. The Romanian authorities need to recognize the strategic importance of the TCLF industry and offer support to these 5,000 companies (mostly SMEs) to make that green and digital transition. The many brands which benefit from high–quality production in Romania should also assume their responsibility to maintain a competitive textile industry established within the EU Single Market.”

“TCLF companies in Romania can considerably increase their contribution to the national economy if they count their appropriate resources and skilled workforce. They now have the opportunity to increase their presence in shorter supply chains and get closer to European consumers. It is therefore urgent that they have access to public funding for investing in modern technologies in order to remain competitive and prevent brands from offshoring work outside the EU.

Furthermore, a public and private collaboration between all categories of stakeholders should be promoted to attract newcomers to the TCLF sectors and upskill workers within a national TCLF Pact for Skills.”

“The challenges that Romanian leather producers are facing with the tsunami of EU regulatory initiatives stemming from the EU textile ecosystem strategy are paramount, but so are the opportunities. Leather is the perfect circular material for tomorrow’s EU slow fashion market. Yet, this needs to be secured through proper impact assessments in the context of new EU legislation. This has not been the case in the Commission Proposal for Deforestation-free supply chains which, apart from unfairly stigmatizing the industry, risks putting it in an unsustainable position compared to extra-EU competitors. The Romanian Government needs to team up with like–minded EU member States to ensure that in the current trilogy, leather gets a fair chance for a bright future.”

The workshop was part of an EU-funded social dialogue project ’Ensuring a sustainable future for the Southeast European textile, clothing, leather and footwear industries, carried out in cooperation between European industry associations EURATEX, COTANCE, CEC, and industriAll Europe. The two-year project covers Bulgaria, Croatia, North Macedonia, Romania, and Serbia, where the TCLF industries employ over 400,000 workers.