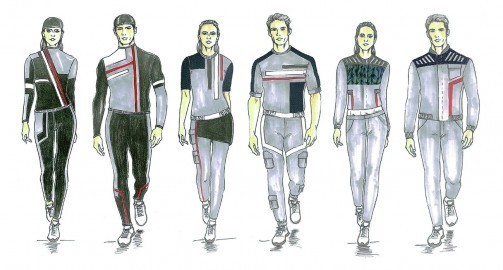 ʺIs there life on Mars?ʺ was the question asked by pop giant David Bowie, who died recently, in his song of the same name. Today’s reality: apart from a few indications that the desert planet was enveloped in water billions of years ago, life, particularly of the two-legged variety, has been something of a rarity up till now. Upcoming missions to Mars are about to change that. First designs for the uniforms of the ‘marstronauts’ are already on the table.

ʺProbably not extravagant enough for Bowie: the winning clothing design, ‘Nostalgia’, worn by terrestrial models in the Spacetex design competition.ʺ

These designs are by textile and fashion design students who, as part of a design competition, have tackled the question of what astronauts’ clothing for a long-term mission to Mars could, and should, look like. The background to this is the research project, Spacetex 2030, in which the Hohenstein Institute, along with Berlin’s Charité hospital, the German Aerospace Centre and Schoeller Textil AG, have developed textile materials specifically for use in zero gravity conditions, by conducting, among other things, experiments on the international space station, ISS.

To put their ideas into practice, the young creatives were given metre-wide strips of various high performance materials. Their specific challenge was to incorporate creative and psychological elements into the designs, in addition to functional and physiological aspects that result from months of zero gravity. ʺWe didn’t just have to take into account the changes in sweat transport, and the bone and muscle atrophy that occurs in outer space, but also the duration of a mission like thisʺ, says Linda Pfanzler. The master’s student in Textile Products & Design won first prize with her design, ‘Nostalgia’. 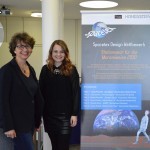 The problem is that, for the time being, it is more difficult to get hold of return air tickets for Mars than concert tickets for the British singer Adele. The flight time alone – this lasts about 18 months, nine out and nine back – blows any summer holiday planning out of the window. According to Pfanzler, therefore, the astronauts should be able ʺto take a piece of home with them on the long journeyʺ. It follows, then, that her designs (see photo) are inspired by skyscrapers (orange stripes) and that the colours she uses are intended to conjure up concrete and the evening lights of an urban landscape. If desired, the section at chest and shoulder level can also be printed with an image of the wearer’s favourite material, for example, denim or leather. The concept even incorporates a small ‘scent library’ to store memories of terrestrial aromas.

Unlike the ‘marstronauts’, designer Pfanzler from Mönchengladbach is keeping her feet firmly on the ground: ʺIt was exciting to work with outer space in such a realistic way. Is there anyone who is not interested in the cosmos? In future I want to continue working on the interface between function and fashion, because I’m sure that this connection will have a big future on earth as well.ʺ